What's in a Statutory Citation?

Session laws are the chronological compilation of laws enacted in a legislative session.  Their citations usually start with a popular name followed by an official numbering of some sort (such as Public Law # or Chapter #) which should include both a legislative session designation and an a number.  These are usually followed by a statement of where it can be found in print, which follows the form: volume number, name of session law set, first page number and pinpoint page number.  The year of enactment appears at the end in parentheses.

Codes are the topical arrangement of laws currently in force.  Their citations can also start with a popular name, although often they don't.  Codes can be divided into numbered Titles, Chapters, or Articles, or can be a series of named codes such as a Criminal Code and a Domestic Relations Code (see New York and Texas for some examples of the various names possible).  Code citations usually start with the title, chapter, or article number followed by the abbreviation for the code, or for the unnumbered codes, the abbreviation for the named code, followed by section number.  Since you are not citing to a particular page, these citations are already vendor neutral.  A code citation usually ends with the date of publication of the code volume or pocket part you found it in or the  latest update date of the database you used to find it.  This is because the same code section may have different language at different times, and a citation should allow the reader to look at the same book, pocketpart, or database entry and see the same language that was seen by the person citing it. 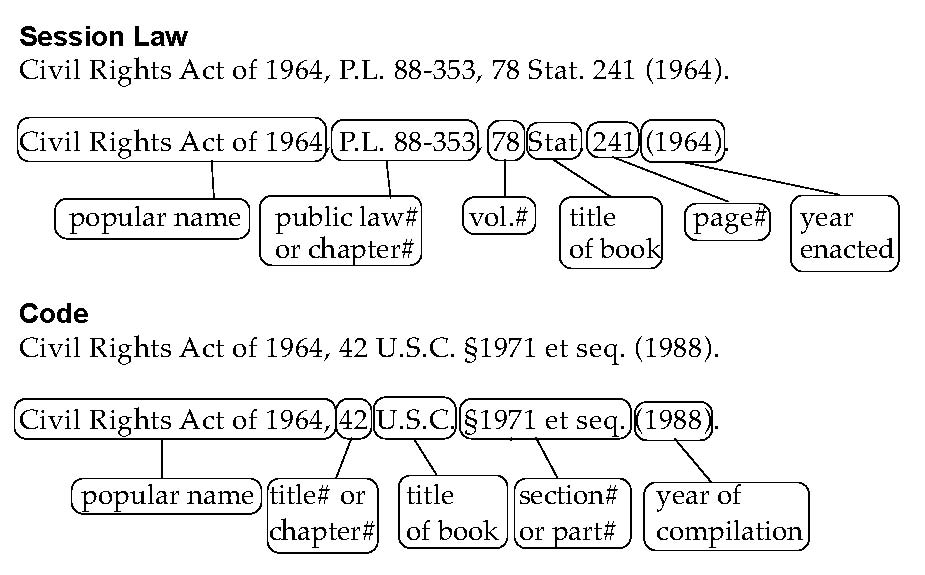